A write up from our Shoalhaven trip on the long weekend. Such a winning river! 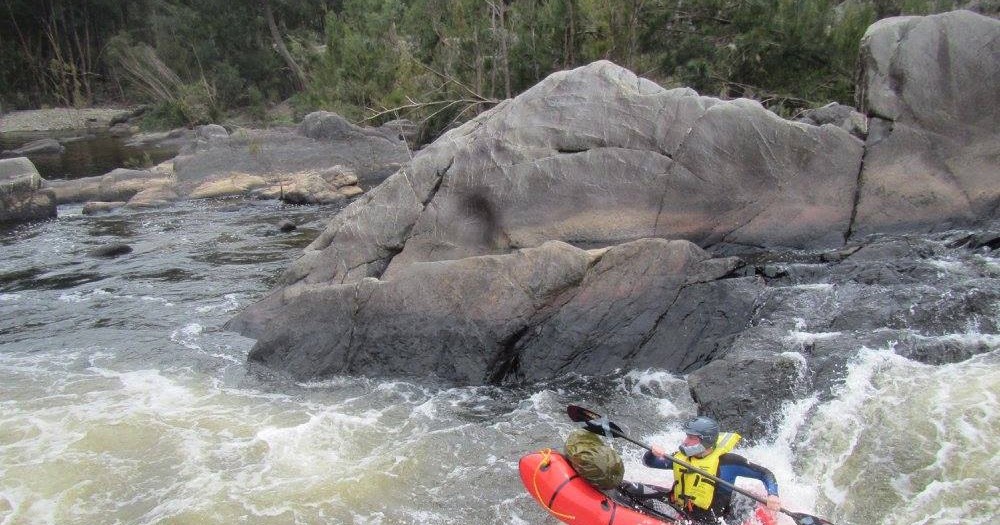 “How is there enough water in it?” I wondered to myself checking the river gauges of all of the usual suspects. Colo – bone dry, Nepean – bone dry, Grose – bone dry, Cox – bone dry and so the list went, except for the Shoalhaven, which was festively plump with no sign of tailing off. Now at more manageable levels than my earlier high water beginner epic I was keen to check out a different stretch. On Monday the call was made for a beginner’s trip from Greater Horseshoe Bend to Long Point.

Come Saturday, seven people had managed to beg, borrow and steal their way into boats and camping gear and were blearily heading to the rendezvous at a small café in Marulan. After coffee and some logistical chats, the rather substantial car ferrying operation kicked off. One car was placed at Longs point for the 3 day group, another was placed at the start of the Stan Jones Trail/ Trestle Track for the 2 day group, and two cars were driven to the put in at Greater Horseshoe Bend. A note of caution, this route wasn’t in great condition and would probably become impassable in a 2wd after rain (or without rain if you are lowered or are precious about your car).

So 3 or so hours later we ended up descending into Greater Horseshoe Bend. The walk was hot and the track wasn’t particularly well formed and at the end we found ourselves scrub bashing the last 200 metres into a sandy bank which served as a great lunch, inflation and river entry spot. After tempering the boats it the cool water (maybe 16C?), we got straight into the action of the first chain of grade I-II rapids. At this height the rapids had sufficient water and the group easily splashed their way through.

These early friendly rapids got me excited about a section of river I pretty quickly claimed to be the best beginner white water I had encountered. The rapids were generally friendly and plentiful, the surroundings were lovely and the water was clear, full of fish and unseasonably warm… This is very different to the usually scrapey, hauley, frigid and or epic trips I accidently end up subjecting beginners to.

With so many beginners on the trip, I would scout any rapid I couldn’t see a clear line and a drop pool below, which was about 20-30% of them. There were a couple of rapids with fairly severe tree based strainers, so keep an eye out if you are in a rush. One very noticeable (unfortunately) tree was the willows which seem to be starting to establish themselves. Next trip, I will try and organise something with willow warriors to knock a couple out!

With the sun setting on day one we stopped for the night at a nice bend in the river, next to probably the hardest rapid of the day (II+). After unloading the packs a couple of us re tempered the boats and despite my predictions that 50% would come unstuck we all got through the ‘before dinner rapid’ unscathed. Full bellies, sore arms, intense discussion about the necessary size of cooking vessels and copious cask port then made for a restful sleep.

Hitting the water a touch before mid-day, we now floated our way towards two disused chimneys that signal the pull out for the trestle track. In between us stood some spectacular scenery, copious water dragons and some really interesting rapids. Two rapids were particularly noteworthy.

One involved an interesting river braid, in which the right was well and truly clogged, while the left arm continued around these obstacles, about 2.5 m above it, thanks to a peculiar ‘retaining’ rock wall. Lower down the left arm, the rapid fanned out, which at this level dispersed the water too thinly and posed a threat to the cheapo rafts. To overcome this, we ran the first half of the left arm before pulling out and switching to the right arm, which at this stage was good paddling.

The washing machine was the only grade 3 rapid and was portaged by all of the beginners. It is a shute on river right that starts with a fairly strong pillow and finishes with a reasonably powerful hole. This rapid reminded me just how good Alpacka rafts are! First off I shot the rapid with the Llama and with the assistance of thigh straps, easily boofed and cleared the hole. After having so much fun, I decided to repeat the process with a $20 raft and soon remembered that they don’t have any control or rigidity and I came perilously close to getting sucked in… good idea to have beginners portage this one!

Now with our adrenaline done for the day we continued through the spectacular Blockup Gorge and on to the two disused chimneys for lunch and good byes to half of the group. For those pulling out here, don’t follow a track until you find the sign as there are soooo many animal tracks! The small sign is at the very base of the climb, up from the grassy campsite. The day 2 team commented that the climb out wasn’t too bad.

Fearing the idea of carrying wet boats up a big hill, the day 3 team now rushed towards a camp site below Long Point. Based on our recent progress, we were certainly sceptical and made preliminary plans to camp at Hermit flat, near Bungonia Gorge. As luck would have it though, this section of river was super quick, comprised mostly of fast flowing and scouting free grade I – II and flat water, with the exception of one grade II+ with a bit of tree sieve on river left.

So with the setting sun, we pulled up to the substantial split in the river which signalled the pull out. We then quickly set about drying gear to reduce the pain of a wet slog up a big hill the next day. Dozing off, I thought to myself, ‘Finally a beginner’s trip without any of my trade mark un-pleasantries’. Of course this wasn’t to be…

Another mid-day start, saw us plodding up the spur that snakes its way down to the river from Kingpin Mtn, hoping to meet the track at a very narrow pinch. Of course THE MAP IS WRONG AND THERE IS NO TRACK THERE! This had us in a pickle as we had now reached a gradient on Kingpin Mountain which our group couldn’t cross with their heavy packs on the loose shale. After some emergency Natural Confectionary Co, we made the decision to head back down the ridge while extensively scouting off of the side (50 – 100m of elevation) for the track. When this proved unsuccessful, we plodded the 500m back down into the Shoalhaven.

Now, 5.5 hours after setting off, we were back at square one, only more exhausted and running low on light. Luckily on the way down we had fanned out thankfully spotted a couple of tell-tale pink markers. With this knowledge, the hot and bothered party proceeded to flop into the river and wallow extensively until they were ready to face the hill again.

Now on the trail of these wonderful little markers, we had no problem finding and staying on the track, which ended up being about 200 or so meters below where it is marked on the map. When we finally got to the cars it was 20:30 and after a bite to eat and a car shuffle (substantially slowed down by roos and wombats) we only ended up back at Marulan around 12, getting us back into Sydney at 2am.

Certainly a trip to remember and definitely my pick for a beginner’s packrafting trip around Sydney and Canberra!
P.S. The river height is currently at 0.79m (15.10.2015)
Latest River Heights - South Coast (NSW)"

Thanks Jeremy! Another great trip and report- very inspirational
Question on access please: do you get to Greater Horseshoe from Bungonia town by going down Inverary Rd and then Matadoro trail? No locked gates?
Cheers
Lizzy

Glad you like it and you are correct about access. The road is in poor condition, so if you can at least take an AWD or something similar it would give more piece of mind. We had to push a 2WD free at one point.