In this 40 minutes long film we follow six friends on a journey to hike to and packraft the river Kaitum in Swedish Lapland by packraft. The group doesn’t take the easiest way to the river and walk into a snow storm at the first day and is forced to choose between continue or turn around. Beside all the drama, Earning a River is a warm film about comradeship and sharing the joy of being in nature.

The river Kaitum is one of one four free flowding rivers in Sweden. It has it source around Sweden’s highest mountain the Kebnekaise. The river is a popular fishing and occationally canue river but as it completely roadless for the first 70 km until the village Kaitum.

Earning a River won best Danish Film of the Year at Nordic Adventure Film Festival 2020 and has been screened at a handful other film festivals: National Paddling Film Festival (US), Transylvania Mountain Film Festival (Romania), Festival Ushuaia Shh (Argentina) and Västerås Film Festival (Sweden). The film is in English.

Making this film is mostly a one man band and has been a huge task. I made this film in the cap between everyday work, a task that took me over two years. The documentary is free to watch but if you like it please consider supporting my work (link inside the film).

A huge thanks to the sponsors Alpacka Raft and Aqua-Bound. 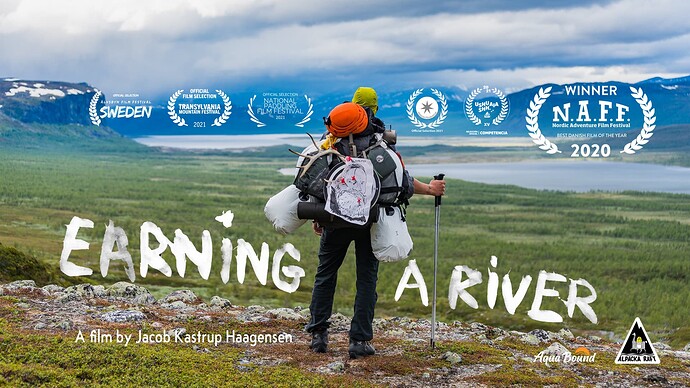